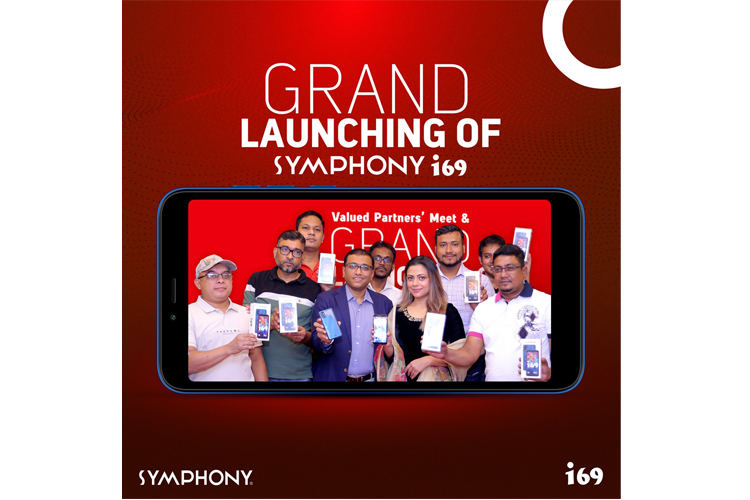 Symphony, the best-selling handset brand in Bangladesh, has launched a new smartphone called i69. Available in three attractive colors, Black, Blue, and Green, the smartphone comes with an operator bundle offer for just Tk. 6,990.

Commenting on the new smartphone, Jakaria Shahid said, “The demand for smartphones has increased among people of all walks of life in developing Bangladesh.” Regardless of the budget, everyone is demanding the use of advanced technology smartphones. Symphony i69 produced in Bangladesh is an example of low-budget advanced technology. Symphony i69 will be ahead of all other phones in the market in terms of technology usage and price.

Highlighting the various technical aspects of the new smartphone, Symphony said that it uses Unisco’s 1.8 GHz Octacore processor and the latest Android 11 Go operating system. The 5.7-inch large IPS display has HD Plus or 1520 x 720 resolution.

The handset has 2GB of RAM and 32GB of internal storage which can be expanded up to 64GB. There is an AI-enabled 8-megapixel autofocus camera for taking nice and vivid pictures with an aperture of 2.0 and a 5-megapixel front camera for taking selfies.

Selfie will be much more interesting because of the display flash. Camera features are, both camera portrait mode, night mode, HDR, face beauty, and many more features.

There is a 3,000 mAh Li-polymer battery, which can be run effortlessly one day based on the variation of use. The handset has a fingerprint sensor and face unlock as well as some special features like Parental Control, Digital Wellbeing, Eye Comfort, and Dark Theme.