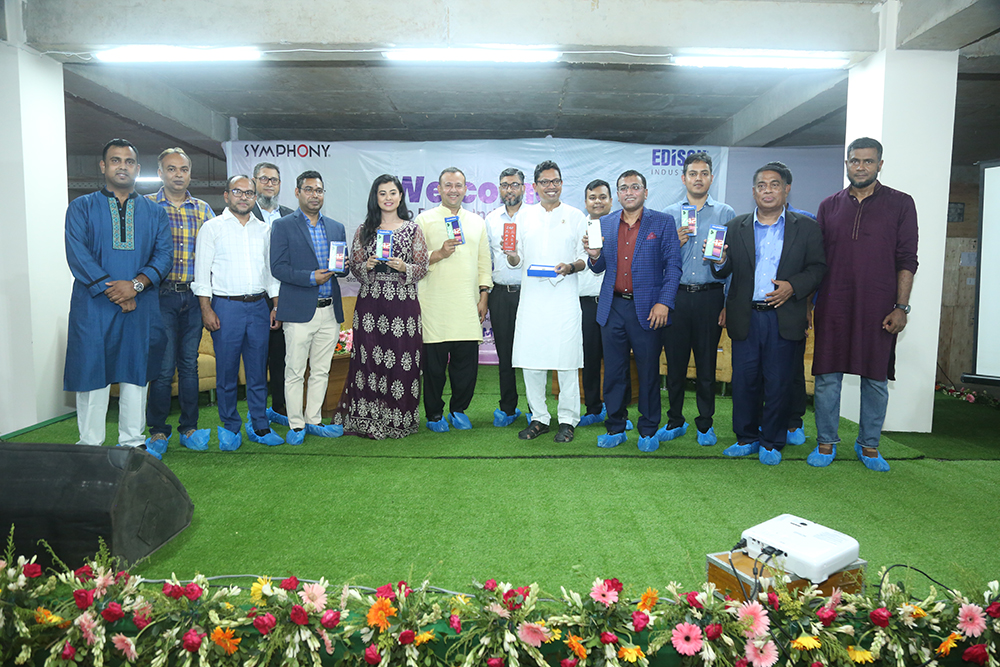 Due to the decision of Prime Minister Sheikh Hasina, Bangladesh has now established itself as a digitally recognized country in the world as an exporter of digital devices through the production of smartphones. Symphony will lead the mission of building an ‘innovative smart Bangladesh’ to meet the target of 5 billion export earnings and 3 million jobs from the technology industry by 2025. Soon, the company will become a successful global brand like Samsung and LG in South Korea.
State Minister for ICT Junaid Ahmed Palak expressed such optimism at an exchange meeting after visiting the factory of Symphony, one of the country’s leading mobile manufacturers, at Ashulia in Savar on Saturday (April 18) afternoon.
The Minister of State for ICT unveiled Symphony’s new Z42 smartphone handset at the event. Appreciating that they have their mobile games and apps along with their phones, Palak said that these initiatives will take the implementation of the conviction of building an innovative smart Bangladesh country forward.
Hosted by Murad Chowdhury, Head of Human Resources, the event was attended by Jakaria Shahid, Managing Director, Edison Group, Major Abdul Malek Miaji, Head of Corporate Affairs, Edison Group; Sobnob Bubly, Brand Ambassador, Symphony Mobile, & Riaz Ahmed, MD, Pink Creative Limited.
According to Symphony, the Z42 smartphone will last a full charge for up to two days and the glass battery cover, AI-enriched triple camera, and MediaTek’s premium chipset give it the flagship badge.
Symphony Z42 has Android 11.0 as the operating system. With a 20: 9 aspect ratio, this handset has a 6.52 inch 2.5D In-Sell V notch display with HD Plus or 720 * 1600 resolution
The 1.8 GHz 12 nanometer MediaTek premium quality Halio A20 chipset comes with 3 GB DDR-4 RAM and 32 GB ROM which can be expanded up to 256 GB via memory card. As a GPU, there is IMG GE8300 with a speed of 550 MHz, so you can play mid-range games with ease. And the 5000 mAh non-removable Li-Polymer battery is guaranteed to pass the day effortlessly.
There is an AI-enabled triple rear camera on the backside of this smartphone for taking beautiful pictures. The 13-megapixel primary camera has an aperture of 1.75 with a 0.08-megapixel depth sensor and a 0.08-megapixel Ultra AI sensor. There is an 8-megapixel front camera with an aperture of 2.0. The Z42 can also be used in portrait mode with both front and back cameras. The back camera also has a feature called UHD mode which allows you to take pictures at 52 megapixels.
Notable features of the camera are AI, Night Mode, RAW-Mode, Macro, Geo Tagging, Watermark, Insight Google Lens, GIF, Burst, Panorama, etc.
In addition to the multi-function fingerprint sensor, the smartphone also has some other important sensors like G-sensor, light sensor, and proximity sensor.
Symphony Z42 is available in Honey Dew Green and Black color with an attractive bundle offer for only taka 9,599.