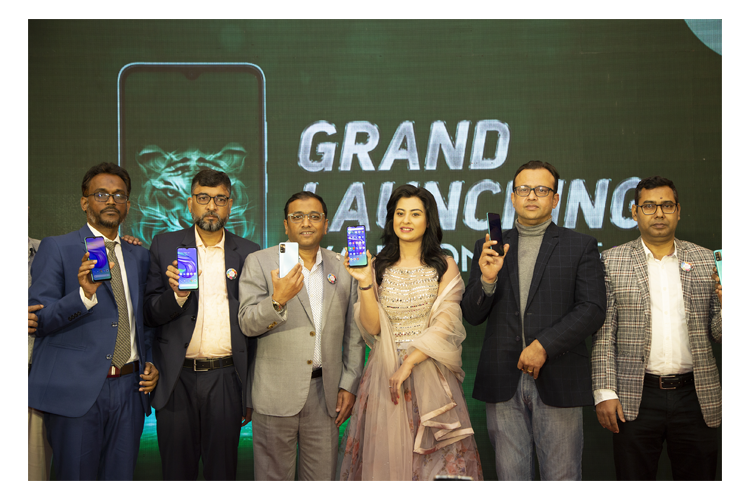 Symphony, the best-selling handset brand in Bangladesh, has launched a new smartphone called “Symphony Z45”. The smartphone will be available in two colors – Blue and Green with an attractive bundle offer for just at tk 10,190.
Launching program of the new Symphony smartphone was held in a convention hall at Mirpur in the capital. Symphony Mobile’s Managing Director Jakaria Shahid, Managing Director of Pink Creative and prominent actor Riaz along with the brand ambassador of Symphony Shobnom Bubly unveiled the smartphone Symphony Z45.Symphony channel partners and other officials were also present in the program.
Responding to a question from journalists, Jakaria Shahid said, “We have come up with this trendy Symphony Z45 phone keeping in mind the young generation. All the new features of the latest version of the popular Z series lineup will give users a different experience.”
The phone has an Android 11 operating system. With a 20: 9 aspect ratio, the handset has a 6.52-inch V-notch display with HD Plus (720 x 1600) resolution.
With a powerful 1.8 GHz 12 nanometer processor and UNISOC’s Tiger series gaming chipset t610, the GPU has 614.4 MHz and DDR4 version RAM, making high-demand games easy to play.
The Z45 handset has a dual rear camera with artificial intelligence. 13-megapixel main shooter with aperture of 1.85 and a depth sensor of 2 megapixels. For the 1.85 aperture in the main shooter, the picture will be much more vivid. Taking a selfie this handset has an 8-megapixel front camera with an aperture of 2.0. Samsung sensors have been used as camera sensors. Notable features of the camera feature are AI, Portrait supported both camera, Panorama, Slow-Mo, Q R Code, Time Lapse, interval, HDR, Face Beuty, Watermark, Enhance Low Light Photo, Burst, Audio Note, Display Flash, Flash Light, etc.
Symphony’s new smartphone has 4GB of DDR4 RAM and 64GB of internal storage that can be expanded up to 128GB via a memory card. No need to worry about battery charge even during heavy gaming or multitasking because the 8.63 mm thick handset is powered by a huge 5000 mAh Li-Polymer battery which can be used for two days in normal use.
In addition to the multifunction fingerprint sensor, the smartphone also has usable features like Gravity, Light, and Proximity sensors.
Some of the other notable features of Symphony Z45 are Digital Wellbeing, Fingerprint swiping system, Do Not Disturb Mode, Bed Time Mode, Bed Time Mode Scheduler, Google lens in camera, Dark Theme, and Face Unlock.